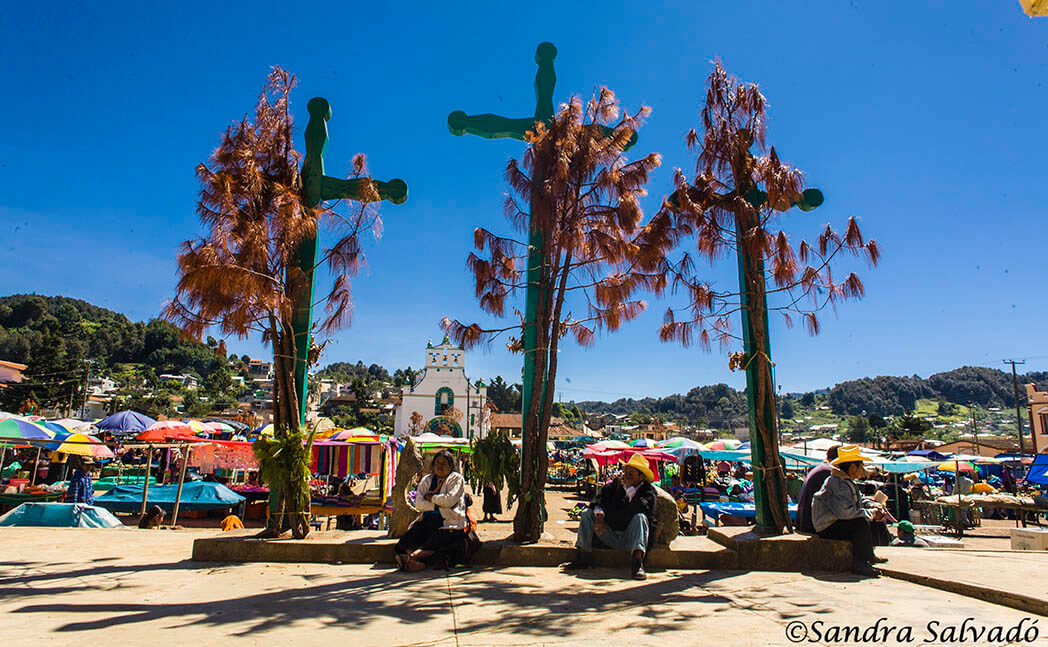 San Juan Chamula is the home of Tzotzil Mayas, who preserve a closed world of traditions. In the temple of San Juan Bautista amazing rituals are practiced, fruits of the syncretism between Christianity and Mayan beliefs.

The vast majority of those who have visited San Juan Chamula we get the impression of having been in a unique and special placeand so it is. Chamula is touristy, in the sense that there are few travelers who travel through the state of Chiapas in Mexico and do not come here. The extraordinary thing is that despite the constant trickle of travelers, San Juan Chamula survives practically impervious to foreign influence. And by foreign also I refer to the Mexican.

Why is San Juan Chamula special?

San Juan Chamula is the home of 60.000 tzotziles. This town is governed by different rules. No body of the Mexican police enters here: neither the army, nor the municipal, nor the federal, nor the navy. They have their own police, do not pay taxes, or change the time with the rest of Mexico. There are no hotels either and the foreigner must leave before the 6 in the afternoon.

San Juan Chamula is a world apart, it preserves privileges that have been earned, so they feel it.

Despite receiving Spanish influence During the colonization period, it was one of the few places where it was not permanent. This motive added to others along with their deep beliefs, made Christianity not delve into the population, and now practice a religion certainly surprising, mix of syncretism in Chiapas, of Christianity, 25% and its Mayan beliefs, an 75%.

Located in the center of the town, the temple of San Juan Bautista It is the maximum attraction for visitors. The entrance ticket to the temple You buy it in the City Hall office, next to the plaza. It is a privilege to be able to peek into this private plot of the Tzotzil.

It is forbidden to take pictures inside the temple

We are allowed to enter this temple under the strict norm of can not take any photo inside, and I advise you not to try, of course out of respect and because you can really get into trouble. You will not need a photo to remember the place.

What to expect from the church of San Juan Chamula?

More than a religious temple, we must see it as a Mayan hospital which is open 24 hours every day of the year. Previous appointment to talk about the problem to deal with one of the shamans or doctors (the 80% are women), meet the agreed day in the church the shaman and his patient to heal the emotional type (passion, envy, problems of work ...) or physical ailments. Everything is cured here inside.

In this special space We can contemplate their rituals Without fear of disturbing them, the Tzotzil go to theirs, they do not put on the show. You enter this hospital and you are simply a luxury observer of their rituals.

Liturgies and rituals in the San Juan Bautista temple:

Upon entering temple of San Juan Bautista You can feel it is a different place. It has no benches and the floor is covered by a blanket of pine needles.

On the side walls of the temple are placed the Saints, some over 300 years. The most important figure of the temple in San Juan Bautista, who occupies the middle of the nonexistent Chamula altar. The Chamulas make their prayers and offerings while we walk through the temple, taking care not to step on the hundreds of colored candles that occupy the floor. During their prayers they are drinking an alcoholic beverage in the area, the posh, which comes from the fermentation of corn. It is not strange to see more than one raised in tone arguing and claiming their saints, while combining the posh with cola, so that they can erupt when interacting with them, expelling what kills them. A fact that they gave, I do not know if certain or not, is that each inhabitant of Chamula drinks an average of three cola drinks a day.

Keep in mind that you can see chicken sacrifices inside the temple, enter with an open mind.

Why go with a guide to the temple?

Knowing the operation and liturgy of rituals helps you to appreciate and understand what is happening around you: Why are the little ones carrying hanging mirrors? Why do they drink coca cola during their ceremonies?, Why are some saints covered with robes? What are candles for and what do their colors mean? What is the transparent liquid they take? Why do some people sacrifice chickens?What are they murmuring to their saints? Very interesting answers that I suggest you let yourself be explained by a local guide: they charge about 100 pesos, you find them at the entrance of the temple.

My recommendation would be to enter the temple without a guide and contemplate the place to your enjoyment. Then I would go back with a guide to appreciate it better and enjoy it more.

En San Juan Chamula There is a fascinating world that opens a door to our vast human diversity and our particular way of facing and understanding life. May know and try to understand other human worlds is the path of respect and global understanding together with the individual.

In the cemetery of Chamula, loaded with symbolism, we can know other paths that guide us to another way of seeing and facing death.

The tombs in Chamula they do not have tombstones and the color of the crosses indicate the age of the dead, being white for infants, green and blue for adults and black for the elderly, people from 52 years (true that life expectancy has lengthened considerably in our times and traditions are modified, nothing is unmovable in time). In the crosses we only see the date of death, start of his new trip.

HOW TO GO TO SAN JUAN CHAMULA FROM SAN CRISTOBAL

DIt is San Cristóbal de las Casas el tour indigenous peoples (It includes Zinacantán and Chamula) has a price of 300 mxn approx. There is another interesting horseback excursion that visits San Juan Chamula and Zinacantián that seems different and interesting.

Travel to places like San Juan Chamula It gives you something you do not forget. With a little luck is Salvador that day in the church, one of the few shamans what are you offering clean abroad, and maybe you want to put yourself in their hands. Chamula has given me those little moments forever.

It is easy to go free to San Juan Chamula from San Cristóbal de las Casas. If you go on your own, try to pay a guide to explain it well, it's worth it. However you go, do not miss this wonderful place.

LOCATION: San Juan Chamula is located at 10 kilometers from San Cristóbal de las Casas. HOW TO GET IN PUBLIC TRANSPORTATION? From the Municipal Market of San Cristóbal de las Casas, collect buses to Chamula (30 minutes of aprox, 10 pesos price). If you want to combine the view of Chamula with Zinacantian, you must return to Sancris and take another combi, there are no direct connections between Zinacantán and Chamula. SCHEDULES, PRICE ENTRANCE TO THE TEMPLE AND TIPS: You must pay the entrance to the temple of 25 mxn. It can be visited from early morning until 18. You can not stay to sleep in Chamula. The market is held on Sundays, it is worth a little more colorful. The 24 day in June, San Juan's day, it will be very difficult for you to access the church, everyone goes out to celebrate.

Discover the only farm in Mérida alive to the west