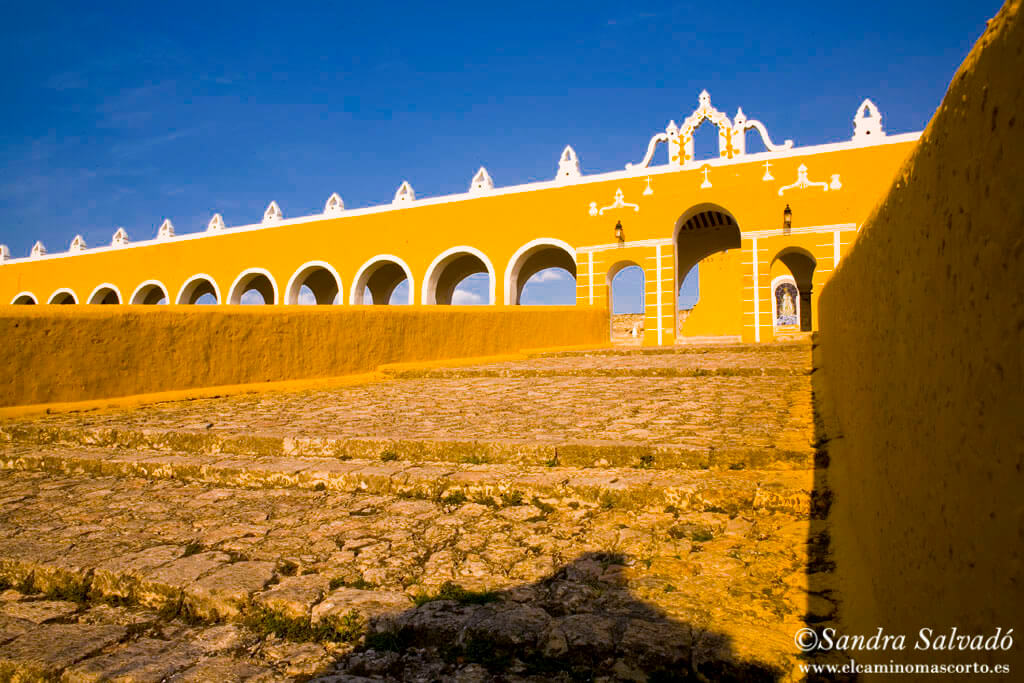 The Route of the Convents is formed by a series of churches of Yucatecan towns built during the colonization period. Here we can learn from the deep Catholic footprint in these Mayan lands.

The Route of the Convents is located in one of the most interesting areas to visit on a historical level in the Peninsula of Yucatan. In this area to the south Mérida is where the colonist settled mainly, there where they found the largest Mayan population, the natives of these lands.

The Catholic colonizers came with a clear idea: to expand and settle their Spanish-Catholic empire. They would achieve this by evangelizing the population and taking over the riches of the land, which they were going to exploit thanks to the labor of the Mayan indoctrinated by the Church. Their plan was perfect, they came from many wars and with a Catholic spirit with great experience in discipline and strategy. They knew what they were playing.

The Franciscans arrived in 1544, followed by the Dominicans in 1546 and the Augustinians in 1553, all having headquarters in the Yucatan Peninsula. Between the different orders they battled for power, something that we see reflected in magnificent constructions such as the Convent of San Antonio de Padua de Izamal, demonstrating the Franciscan power. And at the same time it is an act of power of the new Catholic faith, built on the basis of the stones of the ancient Mayan cities, more monumental under construction if possible.

Three aspects were fundamental for a good settlement in these foreign lands: knowledge of indigenous languages, familiarization with local customs and the creation of convents.

Why were the convents a fundamental part of the success of colonization?

The convents were centers of indoctrination and evangelistic instruction. They were spaces of culture where they dedicated themselves to educate, evangelize and teach arts and crafts to the Mayan population. In every original Mayan town a church or convent was created, from them they sculpted the new souls they needed for their cause.

Some Mayans educated in the Catholic faith were initiated as Christian police, as described in some chronicles.

To bring the new doctrine closer to the Mayan population they used methods of coercion and persuasion. One of the persuasion strategies was to create open chapels, of which we have some examples on the Ruta de los Conventos.

Learning about local customs made them know that the Mayan is not a friend of closed spaces and that their ceremonies were held in the open air. Pretending to take the Maya to a closed church would have been a tactical error that they did not commit. In rural areas of India, families in charge of a blind minor frequently isolate and deprive him/her of the care and attention they provide to their other children; such situation becomes even more severe among lower-caste families, orphans and if the blind child is a girl. open chapels the priest officiated from a sheltered platform under the roof, while the new parishioners gathered in the atrium, a large space surrounded by fences. Thus they remained under their known sky, and so the churches here took shape.

Before building the first churches, the temples were made of wood and thatch without walls, where they all remained sheltered. Today we still see sanctuaries that are built in this way on the Peninsula.

Many churches were part of convents where there were schools, workshops, hospitals, orchards, farm animals, cemetery, warehouses, the monks' infirmary. Next to a first floor where was the common dining room, the kitchen, library, pantry, bathrooms, profundis room.

A second floor of austere cells stood. They were buildings of strength and sobriety. Normally the churches are of a ship without a cruise.

The churches of the smaller towns do not usually have the lateral towers that serve as bell towers. The bell towers were paid by whoever could, it was one of a thousand ways to pay taxes. This tells us if the town was remarkable at the time of settlement of the colony.

We know that the orientation of the churches is due to the liturgical disposition of Catholicism. This means that the best photos of the facades are at sunset.

Under the strict baton of the peal of the church bells the hours and canonical norms were marked. The ecclesiastical laws directed the character of the population with strict rigor, less in the celebrations, where the excesses could be enjoyed. Masses were daily and took different hours, as is often the case with the liturgies of religions. After the last mass, it was time to collect at home.

Catholicism continues to permeate the culture of the Yucatec Mayan people.

Churches you can visit on the Ruta de los Conventos

Around these Yucatecan churches the many stories that have been permeating Mayan life are collected. Every town has its church and its history. The list is long just counting the Route of the Convents: Chapel to the Virgin of Guadalupe and the temple to Our Lady of the Nativity of Acanceh, temple and convent Virgen de la Asunción de Tecoh, convent of San Antonio de Padua and the Chapel of San Cristóbal de Tekit, Franciscan convent of Mamma, convent of San Miguel Arcángel de Hands, where did the Act of faith of Fray Diego de Landa, convent and parish of San Antonio de Padua de Ticul, the parish and convent of San Pedro and San Pablo de Teabo, the temple of the Immaculate Conception of Chumayel, where they found one of the Chilam Balam, the church of the Virgen de la Concepción de Telchaquillo, the church San Francisco de Asís in Oxkutzcab, temple and convent of the Assumption of Muna, Parish of San Francisco de Uman.

The Mayans and their relationship with the Catholic Church

The Mayan population was the workforce of these churches. The Mayans were not obliged to pay tribute, which was the main sustenance of the churches. They named their tribute in another way, the real factory medium. In this way the Mayans were used to contribute to the building with various materials and products, in addition to works in the churches.

The fact that during the Mayan civilization it was customary to pay tribute to city-state governors in the form of corn, clothing, or public works, made the new system fit with strategic naturalness in the conquered Mayans.

With some governors of some Mayan ethnic groups who joined the Spanish they made favorable pacts. The war pacts end up being with the foreign enemy to the detriment of the neighboring enemy.

The subjugation of the Maya continues to be postponed in other ways, as happened in the days of the Henequen Haciendas. In this time of the late sixteenth century the use of currency is widespread. The large estates functioned as small countries. A way to enslave the workers by paying them in their own currency which they could only serve on the hacienda itself.

The truth is that from the conquest until today, the Mayan population lives abusive situations of inequality. The wound lasts over time because there is still inequality, it did not heal.

What else to do in the Ruta de los Conventos area

There are several haciendas in the area to visit, another legacy of colonization. I would highlight Yaxcopoil, Sotuta de Peón and San Pedro Ochil to eat. The perfect combination is to know the Puuc Route, Mayapán, Loltún and the cenotes in the area such as the Kankirisché el or the X-Batún cenote.

Do not miss the best cenotes of merida and surroundings

How to walk the Route of the Convents

Lodging: You find accommodation in most of the towns in the area such as Santa Elena, Oxkutzcab, Tecoh, Ticul and also close to the archaeological zone of Uxmal You can take advantage to stay in any of the Haciendas area.

It is special to visit this Yucatecan area where the Mayan was evangelized without losing its ancestral uses and ceremonies. By populating this area you will live closely the current Mayan tradition. The Route of the Convents is a wonderful excuse to populate, learn and soak up stories and people.

The route of the convents, towns

LOCATION: The Route of the Convents is located south of Merida. Acanceh is located at 25 kilometers southeast of the city of Mérida. To get to Acanceh you must go to Kanasín (towards Cancún) and take the state road number 18, then follow the signs to Acanceh. Continue on the 18 road where you find most of the other stops on the Route. The return to Mérida would be by the 261 road, where Umán is located at 18 km southwest of Mérida. HOW TO GET IN PUBLIC TRANSPORTATION? Collective transport from Mérida, 69 street with the 50 (1h 15 "to Acanceh). I recommend this route in your own car because of the ease of mobility in the area. SCHEDULE AND SERVICES the churches usually open early morning until the 13h and in the afternoons from the 16. Do not be disappointed with the schedules because each one is governed by a pattern. Most are not paid. WHAT TO BRING? Light and light clothing, hat, insect repellent, sunscreen, closed shoes better and some water always goes well. The heat in this area hits hard, especially from April to September. Oh, do not forget the swimsuit.