Piedras Negras, the adventure on the banks of the Usumacinta 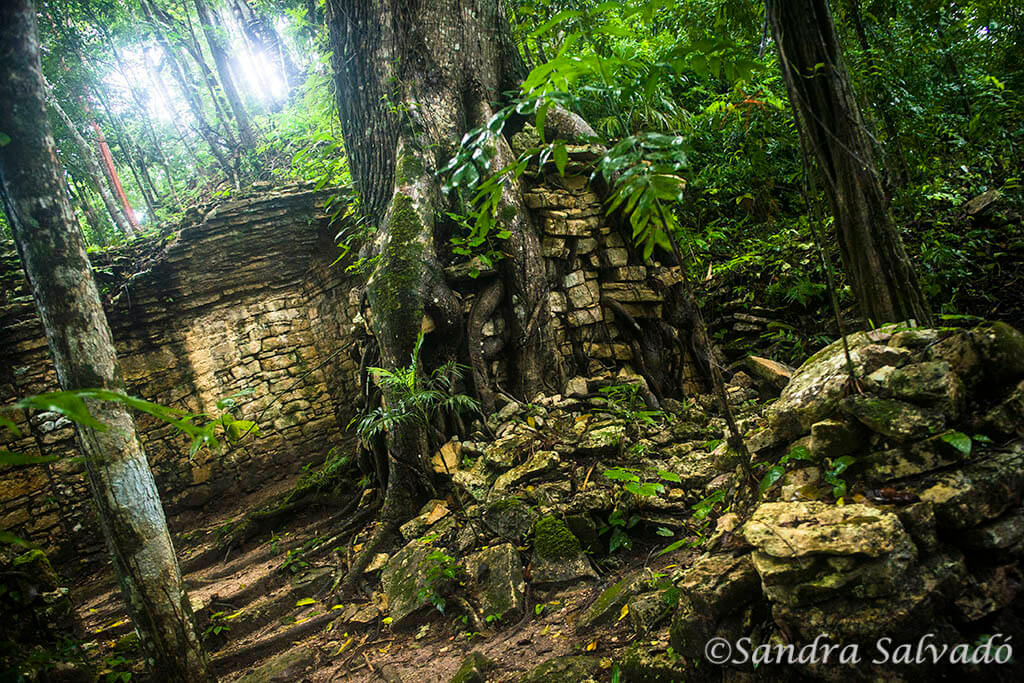 Piedras Negras takes you beyond the conventional. This impressive Mayan archaeological site is located under the Guatemalan jungle, on the banks of the Usumacinta River.

In our trips, many times, everything that we have left a little removed on the map and the conditions are not the usual, we discard it. My experience tells me that in most of the times it is worth making a way to these secluded places, they lead you to incomparable adventures: no doubt Piedras Negras is one of them.

WHERE ARE BLACK STONES?

Piedras Negras It is located on the Guatemalan side of the Usumacinta River, within the Sierra de Lacandón National Park, in Petén.

Leaving Frontera Corozal, even if you cross into Guatemala, you do not need to do any border procedures to go on an excursion. For more than two hours you will cross the Usumacinta streams downstream, between the exuberant nature of this jungle you will reach Piedras Negras. The ride is spectacular, with some rafting down the river, so choose an experienced boatman 😉

HOW TO GO TO BLACK STONES?

Very few travelers come here, sometimes just one group a month. TO Black Stone It is reached by navigating the Usumacinta River, the natural border between Mexico and Guatemala.

It is likely that before reaching Piedras Negras couple to pick up the guides in the boat from the ruins in the military camp where young Guatemalan people go to practice. The guardians of Piedras Negras sleep and live with the military because in their house, being only two, the Tigers (which we know as jaguar) can attack them. This is how the jungle is alive here; it is astonishing to see only the traces of this animal.

To the guard that corresponds to accompany you in your visit to Piedras Negras, sure you know a thousand stories of the place and it is interesting to know about his life in the distance of so many things. It is more than correct to tip the guards.

A LITTLE ON BLACK STONES

There are illegible trails that can be seen in situ

Were the research work of the Russian Tatiana Proskouriakoff in the 60, who following the studies of Russian Yuri Knórosov On a probable syllabic and non-idiographic system, he concluded that what is written are biographical chronicles of rulers, opening the door to the dynastic history that we can read on many stelae. It was a true turning point in the study of Maya writing this discovery.

Tatiana Proskouriakoff it obtained the honor to which many researchers have aspired and few are granted, being buried in Piedras Negras, a small plaque shows us. As friend William K. Boone Canovas notes In the blog comments, in 1980 the Guatemalan government awarded him the "Order of the Quetzal" and in 1998 Ian Graham and David Stuart, two of the most renowned scholars of the Mayan civilization, led a group of friends and students who led the ashes of Tatiana to Piedras Negras and deposited them in the Acropolis, covering his burial with a simple tombstone

Piedras Negras It is also known for the variety and exquisiteness of sculptures that were found, now exhibited in different museums. To know what fauna there is in this area, it is easy to know those animals that were represented in the ceramics and statuettes found: monkeys, jaguars, coatis, dogs, various rodents, bats, reptiles, turtles, owls, crows, eagles and other birds of the zone. Be careful because you will see several of these animals on your tour. Piedras Negras is a cool place.

Visit Piedras Negras It represents a whole day of your trip, walking these vestiges swallowed by the dense Guatemalan jungle is incredible, not to be missed for those in love with the Mayan world, the ancient worlds and nature.

LOCATION: Piedras Negras is on the Guatemalan side of the Usumacinta River, within the Sierra del Lacandón National Park, in Petén, Guatemala. SCHEDULE AND SERVICES: open from 8 a.m. to 17 p.m. daily. They do not sell drinks or food inside PRICE ENTRY: the entry is the least, some 50 quetzales, the price of the boat is 3500 pesos, to share among 6 people. WHERE TO GO? The boats to Piedras Negras leave from Frontera Corozal (Mexican side) or Bethel (Guatemalan side). More options from Frontera Corozal. They are between 3 and 5 hours sailing, depending on the time of year and river conditions. You can share the cost of the boat with other travelers, although those who go to Piedras Negras are rare. From Palenque they sell excursions by land to Piedras Negras, although they rarely go out. In a single day, leaving very early, you can stop down at Yaxchilan (40 km downstream). HOW TO GET IN PUBLIC TRANSPORTATION? Corozal border arrives collective transport from the Palenque terminal (3 hours approx.). Bethel is reached from Flores, in Tikal, Guatemala. ACCOMMODATION: There is camping area in Piedras Negras. You find basic accommodations in Lacanjá Chansayab and Frontera Corozal. WHAT TO BRING? Light and light clothing, hat, insect repellent, closed and comfortable shoes to climb structures and protect you from insect bites, water and food will be fine. Long sleeves and long pants, cover your body well, you are in the jungle.