Reflections on swimming with the whale shark 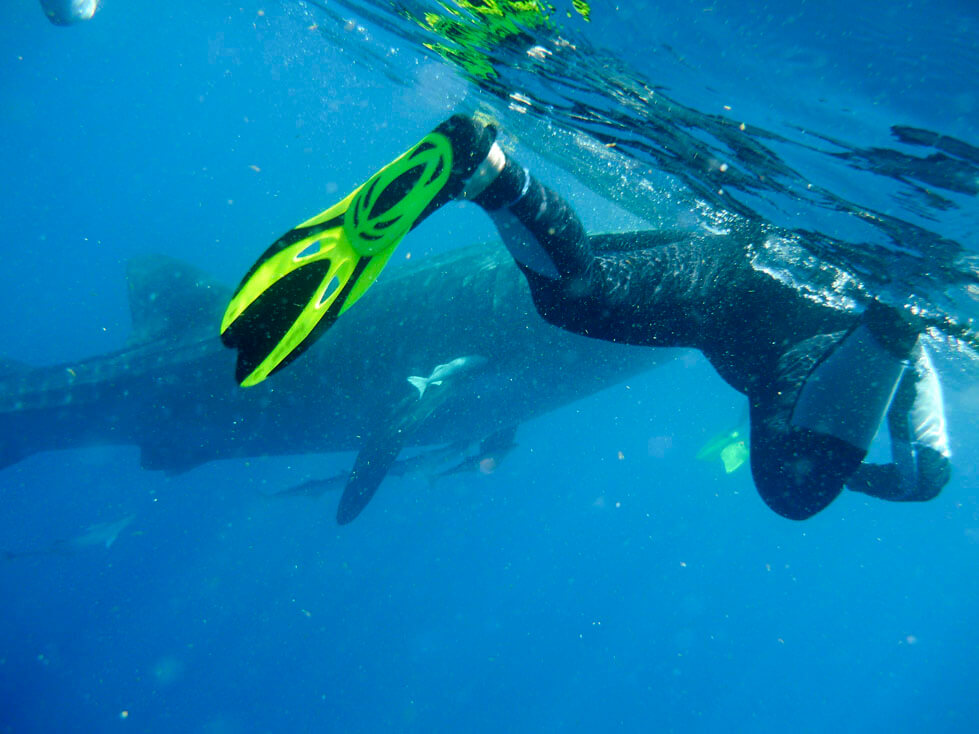 I reflect on the tourist activity of swimming with the whale shark through the mirror itself, that of the experience itself. I have done the swim with the whale shark on 5 occasions, all times different and incredible moments. It is impossible for me not to get excited swimming next to such a colossal animal in the open waters of this crystalline Caribbean Sea, as if you were just another fish, forgetting everything else during those unrepeatable minutes. From the experiences that tattoo you a smile.

Why did I stop swimming with the whale shark?

Swimming with the whale shark began in the Mexican Caribbean on the 2002. From the first time I did the activity in 2008 to date, the number of tourists has increased considerably. Where before there were dozens of tourists, now there are hundreds. It is impossible not to perceive the harassment that the number of tourist boats that participate in this activity each day supposes for the whale sharks. As I learned more about the activity and the business, they told me that half are damaged by the propellers of the boats, but it is preferred not to talk much about it.

The activity of swimming with the whale shark is done by taking advantage of the hours that the colossal fish comes to the surface to feed on the plankton. The confluence of waters between the Gulf of Mexico and the Caribbean is one of the richest places in nutrients, and brings together a large number of marine fauna, including the whale shark. You do the swimming activity during their feeding time, when they remain gathered in a surface area, a perfect situation to raid their table. Empathizing with the animal a bit, imagine being approached at your meal time by a flock of clumsy flies invading your space. Of course I would try to get away from these annoying intruders.

Since 2011 I decided not to go to bother his table anymore, I felt very bad the last times. But imagine that even being aware of what the activity implies, if a friend asked me if it was worth it, I would say yes, although of course I explain my vision. The greed of having the experience is superior to everything, for me it was brutal the feeling of swimming with this animal piece. My decision was made with satiated greed, it was simpler: I only reflect in my mirror and that the experience of what I lived can serve.

The business and its difficulty:

Swimming with the whale shark is an activity that during the scarce 4 months that it lasts, leaves the greatest economic spill in tourist activities to fishermen and tourist entrepreneurs in Quintana Roo.

The General Directorate of Wildlife of the Ministry of Environment and Natural Resources (SEMARNAT) and the National Commission of Protected Natural Areas (CONANP) are the competent bodies to administer the activity. In 2015, concessions were granted to carry out the activity to more than 300 permit holders, with 60 vessels being able to leave per day. In Holbox there are 40 more permit holders. Each boat carries a maximum of 10 people: we are a good band of flies around the animal, right? I read that we got to be 2.300 tourists on a busy day (Source).

The official institutions are sure to try to generate the best service and take care of the animals with actions such as giving counted licenses, duly training the guides and forcing tourists to comply with rules. I know that every year there are new debates about the activity of swimming with the whale shark, and they try to find new solutions to improve. My reflection is that the people involved in the business, both official bodies and private entities, are precisely those that live on the whale shark, it is the mouth that feeds them. And under this natural law, rather than preserve and care for the whale shark itself, what they do is preserve the swimming activity with the whale shark.

SIf it is not debated, putting in the same bag all the possible causes of a bad preservation of the whale shark, the whale shark will never come to fruition, it will always be damaged. This bag should include the question the very activity of swimming with the whale shark, its harmful effect on the animal and its habits. At least as it is handled now.

In a presentation that I attended at the Cancun Planetarium on July 14, 2015 of the documentary "Between Giants: Whale Shark", by diver Alberto Friscione, various questions about the whale shark and concern were addressed, especially when it did not arrive at any moment. I found interesting the participation of people without any monetary link with the activity of swimming with the whale shark (something essential in my point of view to clean up the debate) who pointed out fresh ideas for the preservation, while still making a profit from the whale shark. One of the most recurrent was to limit much more the licenses for the activity, with the main problem of which neighbor you take the bread from. The pressure of business is always evident.

A biologist teacher pointed to redirect the activity so that its impact was less on the animal, with outings to see the whale shark, but without allowing swimming: this meant boats with visibility of the seabed and a much more prudent distance from the boats with the animals would be kept. It does not seem like an interesting outlet for the business, which they know that attractiveness generates more profits Offer to swim with them than just watch them. They are only notes that remain in the air, but they open doors to some mind, who knows.

It was clear in the presentation that there are a real stress on whale sharks. something that many of us who have participated in this activity feel, a point that those involved tend to pass quickly. There's also the obviousness of propeller damage, something I don't like to talk about. It is easier to look into someone else's eye and speak of the private boats that intercede in the business or of fishing permits to Cubans as palpable causes rather than looking into the eye. It is human and natural, I would surely do the same if my business was swimming with the whale shark.

The rules for swimming and reality:

The rules are clear: they rule a distance of at least 10 meters from the boats with the whale shark, two tourists in the water per guide, who can swim at five meters next to the fish and only one boat per organism is allowed for 30 minutes. Besides not putting sunscreen on, only biodegradable (I wonder if there are really biodegradable, what do you think?).

The issue is that the regulations do not know if one day you find 200 whale sharks or if you find 20. Depending on the day there will be time for all tourists, other days the stipulated time of 30 minutes per boat is complicated. Deep down, the whale shark sets the standards, and as we can see it is unpredictable. The boats operate under pressure from customers who, after paying about 200 usd per person, want to get the best service. In these circumstances it becomes impossible or very difficult to follow the rules as it should. We are many, that is the problem. The boats get closer than allowed many times, damaging the whale sharks with the propellers and attacking. For very skillful and good availability that the captain of the boat has, bringing the tourist closer to the animal among so many boats is not an easy task. Part of the fault lies with the customers, although we know the rules and without wanting to incur them, it is easy to cross the path of the animal and bother them, they are not expert swimmers who dominate the moment. It is what there is, why fool us?

The human being takes advantage of all the natural resources at his disposal to make money, it is evidence. The whale shark will not escape the human will to be, but there are always less aggressive ways to act in our environment. I think that the way swimming activity is administered today, we harass the whale shark. The number of boats loaded with tourists that surround them is an outrage, a burden.

That the activity is carried out in full nature does not mean that it is ecotourism, nothing to do. Hopefully we know how to live better with our environment, knowing that we are the greatest predator on the planet, we should become aware and limit our wills. I don't know how swimming with the whale shark will continue to develop, if they will move away from the coast, if we are really annoying it so much that there is no going back, I really do not know, but considering things is the beginning of something.

Thank you very much to Faust for the graphic material, you are an artist 🙂