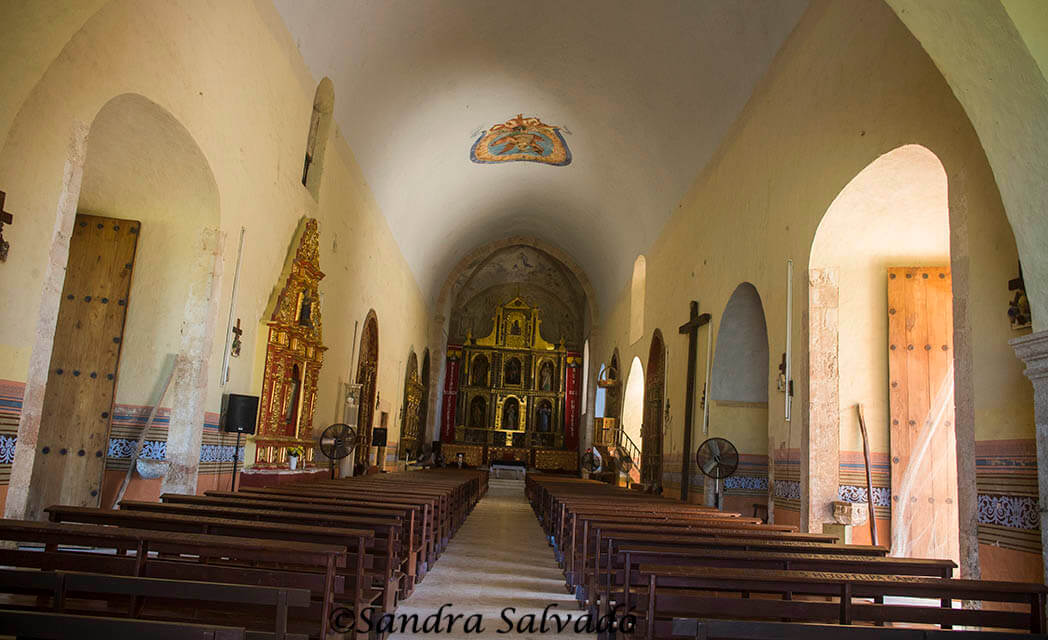 In the history of the Spanish colonization of Mayan lands, the Auto of faith in Maní it has happened as the most terrible episode of violence and destruction of Mayan idolatries. The Franciscan Fray Diego de Landa carried it out in 1562, one of the most controversial characters of the conquest.

Peanut is located in the area of ​​the Yucatan Peninsula where the colonizer settled more firmly, south of Mérida.

Of the three religious orders that arrived in the Peninsula, the Franciscans they were the first in 1544 being the most active in the evangelization of the Maya. Of this order was part Fray Diego de Landa.

Their churches were open centers of culture and evangelism where the Maya came to be indoctrinated. Many preferred to be in missions that did not work for the encomenderos and authorities, who abused them in jobs.

The Church he played a double-edged sword during chapters of the conquest, defending the souls of the Mayas against the Spaniards, maintaining secretive political contests and mutual accusations, intervening in matters of the Crown. As always, the great powers move by their own interests, which often go hand in hand. Today the Church is still very powerful in state affairs in Spain.

In what situation were the Maya at the arrival of the conqueror?

El San Miguel Arcángel de Maní convent began to be built in 1548, and the 29 September 1549 was founded, the year it disembarks Fray Diego de Landa in Yucatan. The entire construction of the convent, the church, the atrium, school, hospital. They built it in 7 years. It was one of the first churches founded in the Peninsula, one of the most important Franciscans. Peanut is without a doubt one of your stops in the Route of the Convents.

Upon arrival, Fray Diego de Landa is directed to Izamal, where is the mission of San Antonio. That same year he was appointed assistant to the guardian of Izamal, starting a prodigious career. From the year 1549 to the 1552 it travels around the Peninsula, seeking to bring the Mayans who lived in the jungle closer to the missions.

In this time is when he learns the Yucatec Mayan language and get in touch with the Mayan writing. Later Landa made an attempt to transcribe it to the Castilian alphabet. These notes, without being precise in the knowledge of the Mayan writing, served as false clues in the deciphering of Maya epigraphy. This fact gives him renown in the gear of the decoding of the complex Mayan script.

There is debate about why he made the effort Diego de Landa for learning their language, and maybe it was also pure intellectual hobby. Some say that their vocation was to approach the Mayans with love and understand them in their devotional purpose of saving souls, while others attribute it to habitual practices in times of wars to better know the enemy and conquer it with knowledge. The debate arises according to who explains the story ... if I see Fray Diego love, it is a love flooded with fanaticism, and that is not love in my understanding.

In 1552 he became the guardian and was entrusted with the construction of the convent of Izamal. After consecutive promotions, Diego de Landa es named provincial of Yucatan in 1561, maximum authority at that time in the region, which supplied to Guatemala. During his mandate there were several times that he persecuted with other friars the acts of heresy of the Mayas. They are attributed more than 6.330 Mayan victims between executions, torture, martyrdom in bonfires, mutilated and several sequels.

One of his reprehensible punishments was towards 1558, when he made a hard expedition through the area of Valladolid looking for punishment by the pagan rituals that did not stop. Many sacred objects were thrown into the Sacred cenote Chichen Itza, where the Maya continued to perform ceremonies.

Despite countless attempts to abolish the old beliefs, the Maya went to the Catholic missions but continued with their ancestral rituals privately. This syncretism of Christianity and its Mayan beliefs is still alive in the current Mayan culture. The Tzotzil Mayan population of San Juan Chamula, in Chiapas, is a clear example for the traveler today.

As a consequence of the discovery in a cave by Pedro Che, guardian of the Maní convent, of a ritual of sacrifice to pagan deities, Fray Diego de Landa moved to this population in June 1562. It constituted a religious court that would open judgments against the guilty. In addition it was allied with the civil authority, being Bohorques the alguacil that attended Landa under pain of excomunión. Dr. Diego Quijada was the highest civil authority in Yucatán.

One of the cruelest episodes of idolatry persecution and destruction began, crowned by the Auto of faith de Peanut. The courts responsible for heresy were tortured, burned, mutilated. The chronicles explain that some Mayans hanged themselves in the forests, those who did not flee.

In the infamous Self of Faith of Peanut, according to a list published by Justo Sierra in the nineteenth century where he claims that in Maní they were destroyed «5.000 idols of different shapes and dimensions, 13 large stones used as altars, 22 small stones carved, 27 rolls with signs and hieroglyphs, tons of books and 197 vessels of all sizes ». This terrible act was necessarily witnessed by the Mayan population.

Consequences of the faith car in Maní

Such humiliation reinforced the power of Catholic God, demonstrating its superiority to the old Mayan gods that were defeated. As we know, the Maya continued with time and secretly practicing their ancestral rites.

There followed a convulsive period where the settlers continued cruelly abusing the Mayans, taking advantage of the inquisitorial imprint of the religious, imparting violent punishments on the population.

And what happened to Fray Diego de Landa?

El Auto of faith de Peanut caused such a stir that Fray Diego de Landa was sent to Spain in October of that same year to give the pertinent explanations to the kingdom of Felipe II.

He was subjected to a judgment carried out by his own Franciscan order, the healthy custom of judging between friends that is Spain, as we see today. Yes, all experts in canon law and the Holy Office of the Inquisition, the most literate in the matter to decide.

Evidently he emerged victorious from the subject, so much so that his return to Yucatan was made in the 1573 as bishop, barely 10 years después of Auto of faith de Peanut.

So reading the story could be seen as a freezing of the character of Diego de Landa, to return to the beginning without anything happening.

It is during his stay in Spain that he writes his recommended book "Relationship of the Things of Yucatan", where he reflects the life and customs of the Mayan culture, interpreted under his fierce cultural yoke. The manuscript took it with him to America and was later deposited in the convent of Merida.

Although his arrival caused misgivings between Spaniards and Mayans, petitions were also received requesting his return as shown by a letter from ten 11 1567 February bosses: «We pray to the VM to pity our souls and send us Franciscan friars to guide and teach us the career of God, and especially some who have gone from these parts to Spain, who already knew very well the language of this land with which we they preached, that they are called Fray Diego de Landa, Fray Pedro Gumiel, of the province of Toledo, and Fray Miguel de la Puebla and the others that VM was served. " There are always voices that rise from both sides, difficult to know how free they are.

They say that Fray Diego de Landa He ordered a Christian doctrine to be printed Mayan language, of which there are references but could not be found. Diego de Landa died in 1579 with 54 years in the city of Mérida. His discussed figure is one of the most important cronistas of Yucatan, fervent devotee, cruel and fanatical.

La History It is written by the winners. It makes me bold to talk about history, but I allowed myself to give my opinion from the read.

Fray Diego de Landa He was one of the most controversial characters of the conquest, the executor of one of the most atrocious acts against the Mayan culture, which is part of the universal culture, of everyone's.

Contact us, Sandra will personally assist you
Sandra Salvadó Training photographer, traveler by vocation and certified tourism guide by the Government of Mexico. We promote natural wonders and contemporary Mayan culture. Great fan of pre-Hispanic history. Author of the blog and co-founder of The Shortest Path Travel, agency that guides you through alternative paths in Mayan lands. Social and sustainable tourism in the Yucatan Peninsula and Chiapas.
I am at your disposal for whatever you need. Let's talk.
LOCATION:Maní is located south of Mérida. Acanceh is located at 25 kilometers southeast of the city of Mérida. To get to Maní you must go to Kanasín (towards Cancún) and take the state road number 18. HOW TO GET IN PUBLIC TRANSPORTATION? Collective transport leaves from Merida, 69 street with the 50 (2 hours). HOURS OF THE CHURCHES they usually open early morning until the 13h and in the afternoons from the 16. To take pictures of the facade, at dusk better.