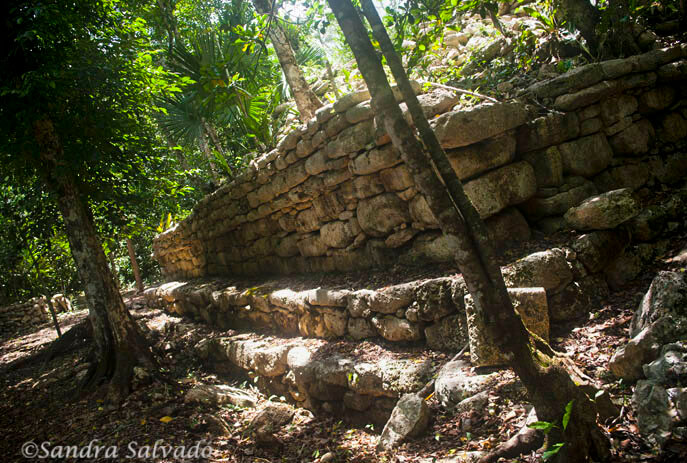 There are hundreds of vestiges that are left out of the traveler's knowledge, places that agencies do not sell or appear on conventional maps. The Orangery is one of them, to surprise you on your way.

The Orangery, like many other Mayan vestiges, after being investigated by the INAH, they return to their anonymity among the high, low and medium forests of the Mayan territory.

Once the professionals investigate, collect the pieces of interest and generate information for the studies, if they do not see an economic benefit, leave again and are under the tutelage and knowledge of the local community.

What 5 archaeological sites of Quintana Roo we recommend you?

They are usually minor ruins of little tourist interest. Some easily accessible, such as El Naranjal, allow some locals who have usually cooperated with the team of archaeologists who investigated the area, to guide you on the premises.

In El Naranjal they have organized and the locals have their website where they promote their activities. You could visit the small community museum, they proudly show it towards their culture and the ancient Maya.

The Orangery It was a ceremonial center of the Classic Period (250-900 dC), used and reused to this day. From the known as Mayan collapse from the 700 AD the Mayan world entered a great crisis, many of the big cities fall and are abandoned in domino effect. This city linked economically to Coba, suffered the crisis of that time.

The consequent migrations that this global crisis generates are towards the north of the Mayan lands, what is now Mexican territory, the Yucatan Peninsula. In this area, during the Postclassic Period (900-1500 AD), it was where the Mayan civilization maintained its strength until its disintegration in the XNUMXth century. In the current state of Quintana Roo is the Naranjal, in the Mayan highlands.

The evidences found in the vestige make the experts say that their formation is from the Classic period, and in the Late Postclassic period they reused the place as a ceremonial center and for the veneration of ancestors.

The tests do not allow to affirm if it was reconditioned only as a ceremonial center, using old tombs and altars, or also as a residential one. Today the Mayans continue to frequent these ruins and nearby cenotes for their ceremonies and rites.


The Naranjal has one of these magical cenotes nearby, where they make ceremonies, it is the Actun Tzuub. Surely there is much to discover under these crystal waters bathed by ceremonies and guarded by aluxes.

These ruins abandoned (those that do not have a toll booth, to understand us) are a livelihood for the locals. Even those furthest from urban centers, being difficult to find, must be accompanied by local guides. If you are one of those who like to poke your head a little further, you will find hundreds of Mayan ruins to do so.

In some you will be surprised with exquisite details such as hieroglyphs that remain fighting over time their erosion, with walls that emerge in the jungle, with steles devoured by moss or Mayan ruins in private properties. For those with the most adventurous spirit, this kind of Mayan feat is such ruins.

No doubt they help us to know and understand the puzzle of the Mayan civilization, the frameworks, connections and relationships between cities. Since The Orangery one sacbé, fireplace In Yucatecan Maya, it takes you to Coba.

Walking through these old roads is something that unfortunately is not conditioned for hiking, here in El Naranjal you have a good way to go.