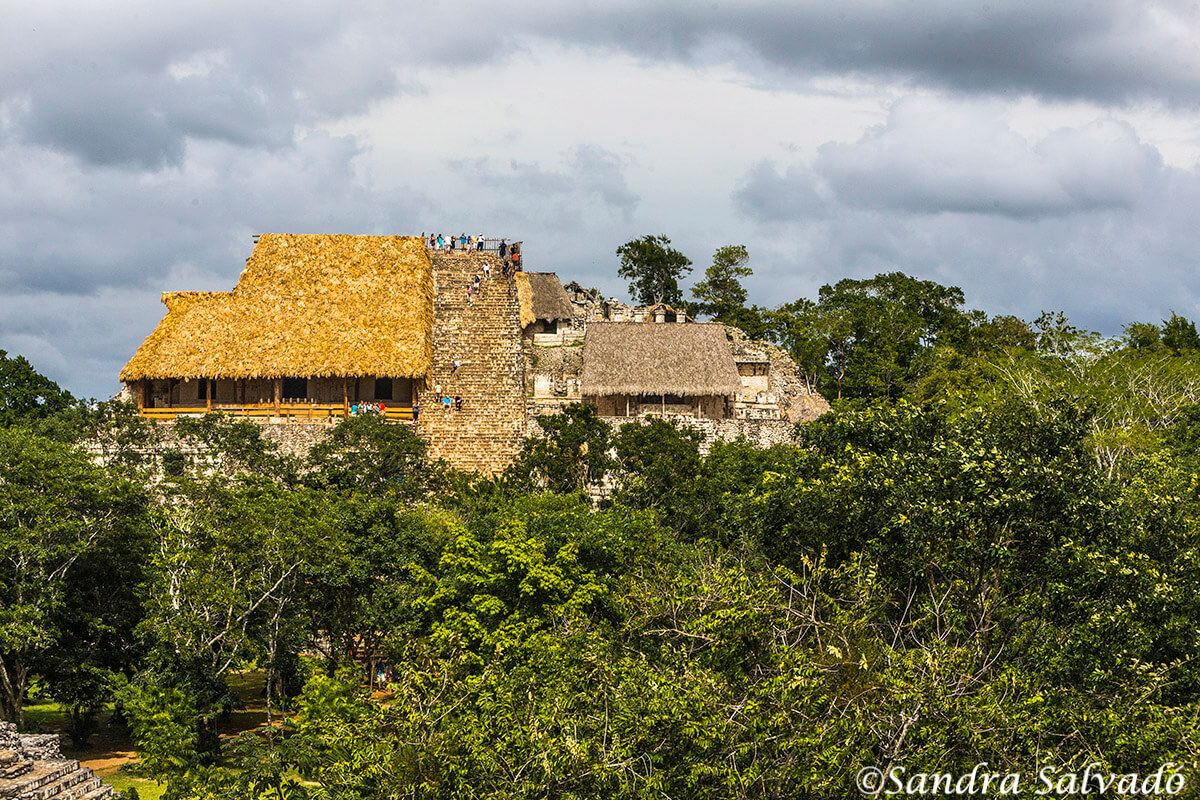 Ek Balam was one of the most powerful Mayan cities in the Yucatan Peninsula. The governor who guided Ek Balam to its greatest splendor was Ukit Kan Lek Tok '. His burial chamber was found inside the colossal Acropolis.

Yucatan Peninsula it is practically flat, the highest point is 300 meters above sea level. Belongs to the Sierrita de Ticul, where we locate the Puuc Route (route of the hills). This smooth terrain covered with jungle makes it easier to discover the most remarkable archaeological sites, the ones with taller and more voluminous buildings.

Archaeologists and adventurers of the XNUMXth century, when they saw a considerable elevation devoured by trees and bushes, they knew that they were facing vestiges of the Mayan civilization.

DISCOVERY OF THE RUINS OF EK BALAM

Ek Balam (jaguar star in Yucatec Mayan) followed the same fate as the rest of the ancient Mayan cities and remained engulfed by its natural environment once it was abandoned.

The French photographer, explorer and archaeologist Desiré Charnay cataloged it for the first time in 1886. Charnay l Mexico in 1857 and with his camera toured the great archaeological sites of Mexico.

It must have been easy to spot the Acropolis of Ek Balam because we are facing one of the largest architectural constructions in Mesoamerica With 146 meters long by 55 wide and 29 meters high.

It is one of the best viewpoints in Yucatan, the views from here are incredible. On clear days you can see other nearby Mayan vestiges.

Discover the 9 Mayan cities highest in the Yucatan Peninsula

The colossal building was occupied by the ruling family and its closest collaborators. Inside its bowels it is the grave of Ukit Kan Lek Tok ' the ruler who led the greatest splendor to Ek Balam.

You will have to encourage yourself to climb the Acropolis, the tomb is located on the fourth platform, a wonder this place.

The entrance to the mortuary chamber of Ukit Kan Lek Tok ' It remained covered by an exterior wall that has allowed it to be preserved in time with its magnificent stucco.

The jaws of a jaguar, an animal associated with the underworld, show the entrance to Sak Xok Naah (White House of Reading), where we see the figure of Ukit Kan Lek Tok ' sitting on his throne, resting on the snout of the monster of the earth, the jaguar.

The Mortuary remains of the great rulers they were deposited in sealed burial chambers within the pyramids. Just as Catholics divide the levels into heaven, earth and hell, for the Maya there are three great levels: heavenly, earthly and underground.

These levels refer to both the outer universe and the human universe, they represent both. The three levels are linked together, they form a whole. He underworld is represented by the ball game, the earthly placed on a rectangular plane represented with the layout of the buildings according to the plane's stars heavenly.

The Mayan pyramids, called witz, are magical mountains with the function of communicating the three Mayan planes.

What are the 5 Yucatan archeological zones What should you not miss?

The Mayan rulers they were buried with their goods, as it happens in so many other cultures of the Planet. Ukit Kan Lek Tok 'was buried in 801 AD "The sovereign's mortal remains were accompanied by a rich offering, consisting of 21 vessels and more than seven thousand pieces of jade, shell, bone and pyrite, in addition to some rare materials such as a gold frog-shaped earring and three pearls ”, According to reports from INAH researchers Leticia Vargas de la Peña and Víctor Castillo Borges, co-directors of the Ek Balam Archaeological Project.

From Ek Balam 5 roads leave (sacbé in Yucatecan Maya). White path It is what is known in Maya as sacbé: it is those cobbled roads that the Mayans used to connect cities and trade routes. The entire Mayan area was connected by countless roads.

Thanks to the innate curiosity of the human being, these first explorers were finding a whole civilization hidden for hundreds of years and have been sticking this wonderful puzzle, which still lacks pieces, but we already know enough to enjoy it.

Ek Balam it keeps locked some of the glyphs that have allowed to have a more precise knowledge about the Mayan civilization. These glyphs also have exquisite and artistic calligraphy, the most beautiful in writing.

It is one of the three archeological zones of Yucatán that charge the State charge in addition to the cost of the INAH. For this reason it becomes more expensive. It is very visited from Riviera Maya, and this flow of tourists has made it more expensive.

WHAT TO VISIT NEAR THE RUINS OF EK BALAM

PEOPLE OF EK BALAM: You have a good opportunity to live closely the atmosphere of a Mayan town staying to sleep in the small town of Ek Balam and taste the current Mayan culture closely. Some women they weave hammocks by hand and sell them at the doors of their homes to tourists.

CENOTES: There are nearby cenotes such as the Xcanche cenote, 1.5km from the archaeological zone. From the entrance of the archaeological site there are tricitaxi or bicycle services, or you go on foot, go. It is open, very beautiful.

To get to the impressive Sac aua cenote you must go to the town of Dzalbay. This area is full of beautiful hollows.

Ek Balam was one of the great Mayan cities of the Peninsula. Today, Chichen Itza surely has something covered, things of tourist interest. the ruins of Ek Balam They won't let you down, here we go with friends.

LOCATION: Ek Balam is located 20 km from Valladolid on the 295 road. From Valladolid you must go towards Tizimín, follow the sign of the archaeological zone Ek Balam. Located at 186 kms from Mérida and 193 kms from Cancún (two hours) SCHEDULE AND SERVICES:Open from 8 to 17 daily hours. They do not sell drinks or food inside. There are services at the entrance. PRICE ENTRY:total 413 mxn foreigners and nationals 153 mxn. There are two payments in: the one of the Patrur of Cultur 78 mxn for nationals, 338 mxn for foreigners, and the payment of the INAH, that is of 75 mxn. National Sundays and permanent residents with official identification pay the Cultur 75 mxn. The Yucatecans pay 75 pesos. On Sundays the entrance of the INAH is free for Mexicans and permanent residents. Access to archeological sites is free every day for children under 12, students, teachers and senior citizens with valid credentials HOW TO GET IN PUBLIC TRANSPORTATION? On the 44 street with 37 of Valladolid there is a public transport that goes to the Ek Balam archaeological zone. Departures are from 8 am to 5 pm and the distance is 35 kms. ACCOMMODATION: In the town of Ek Balam, about 2 kilometers from the archeological zone, you find several. There is a Mayan cooperative that runs the Cabañas Uh Najil. In the cenote there are also cabins and camping area. WHAT TO BRING? Light and light clothes, hat, insect repellent, closed and comfortable shoes to climb structures and protect you from insect bites, some water always goes well. Do not forget the swimsuit in case you decide to visit the X-Canche cenote, 1.5 km from the entrance of the archaeological site.