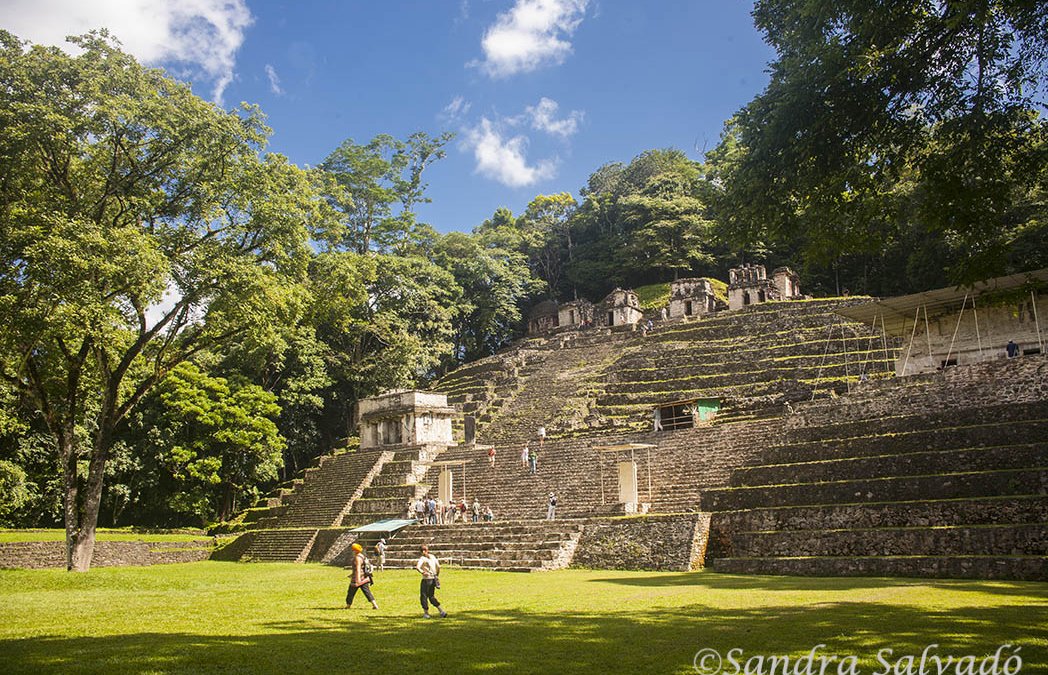 For many years the ancient Mayan city of Bonampak kept one of the most precious treasures: the murals of Bonampak, beautiful paintings preserved inside some bedrooms, some unmissable graphic jewels.

Most of the ancient Mayan cities in this Chiapas area were abandoned around 900 AD, within the period known as the great Mayan collapse. During this great crisis, migrations took place, as always happens: crises displace people from their origins.

The populations were not completely depopulated, the Mayans continued to live in the area but in a dispersed manner and not so organized in the urban centers. These great cities were used for ceremonies or meetings over time.

La Ancient Mayan city of Bonampak was trapped in the Lacandon jungle far from human curiosity, until it was shown to the interest of the world through explorers Giles Healy and Carlos Frey in 1946. “Actually, Carlos Frey took Giles Healy to Bonampak, it was like this last knew the place. But since my father did not have the money or the sufficient support like Healy, he was dissociated from the find ", Frey Solís said, son of the archaeologist.

Obviously the Lacandon Maya, the inhabitants of the area since ancient times, knew the city. They explain to you that their grandparents came from there.

It is always interesting to talk with the locals. I remember on a walk through the Lacandon jungle with Ulysses talking about the sea, he had never seen it and told me to describe it, by the sea I was curious.

The Acropolis of Bonampak

The Acropolis of Bonampak It is its main building: it reaches 46 meters in height, taking advantage of a natural hill that its buildings climb. On the Acropolis is the famous Temple of the Paintings, three independent bedrooms that preserved the great treasure of Bonampak.

The bedrooms remained sealed and the paintings were protected from the harsh weather of tropical climate.

The murals of Bonampak

The paintings of Bonampak, together with murals of San Bartolo (Guatemala), are one of the great pictorial legacies of the Mayan civilization. We do not have much graphic material of the Mayan civilization, so the graphic scenes of ceremonies, processions, musicians, offerings, battles and prisoners that we can see in Bonampak are direct windows to the Mayans of that time, something truly priceless.

Halfway up one of the sides of the Acropolis of Bonampak we can enter the three bedrooms and observe the originals. It is really beautiful to see these paintings.

It was really exciting to see the murals of Bonampak, a dream come true.

The 1 Stela of Bonampak

Another great treasure of Bonampak is the wake commemorative of Chaan Muan II, who is dressed in full regalia carrying a ceremonial staff in the celebration of his 5th anniversary as governor, according to the Mayan glyphs. This colossal stele reaches almost 6 meters high by 2.60 meters wide, and 18 to 20 centimeters thick. We are facing one of the tallest steles in the Mayan world.

It is fascinating to be entertained with the paintings and the stela, being able to observe the details of their clothes, their adornments, their clothes, accessories ... The scholars have been able to interpret the Mayan hieroglyphics found dating the exact time and the names of the protagonists, as well as the glyph emblem of Bonampak.

The archaeological site of Bonampak is somewhat secluded, but there places to sleep. Many visit it from Palenque or San Cristóbal de las Casas, but if you go early, I really recommend you stay a couple of days in this area. There are basic lodgings in Lacanjá Chansayab, a Lacandon Mayan town near the area and in Frontera Corozal, a small town on the banks of the Usumacinta from where the boats leave for Yaxchilán and cross the border to Guatemala.

If you want to see the Sistine Chapel of the Mayans in Chiapas, you are in the right place. I leave a link so you can book your accommodation from our blog: Lacanjá Chansayab and Frontera Corozal.

The paintings of Bonampak, archaeological site

LOCATION: Bonampak It is located 8 km from the San Javier crossing, on the road from Palenque to Frontera Corozal. Frontera Corozal is one of the border points that allow you to cross into Guatemala, but not by car. From here you can go to Tikal. SCHEDULE AND SERVICES: open from 8 a.m. to 17:XNUMX a.m. daily. They do not sell drinks or food inside. There are services at the entrance. PRICE ENTRY: 60 mxn. The Sundays the entrance of INAH is free for Mexicans and permanent residents. Access to archaeological zones is free every day to children under 13 years, students, teachers and senior citizens with valid credentials. HOW TO GET IN PUBLIC TRANSPORTATION? Collectives arriving from Palenque (3 hours), also from the other direction, coming from Comitán (you must take a collective in Benemérito de las Américas). From both directions, you get off at the junction of San Javier, and from here you have 8 km to Bonampak. There are taxis that take you, or the Lacandones in your van, for about 100 pesos. ACCOMMODATION: You find basic accommodations in Lacanjá Chansayab and Frontera Corozal. WHAT TO BRING? Light and light clothes, hat, insect repellent, closed and comfortable shoes to climb structures and protect yourself from insect bites, some water always goes well.